A few weeks ago, Dan Meyer (http://blog.mrmeyer.com/ like you didn't know...) gave an online talk about being less helpful and his WCYDWT. (http://www.oreillynet.com/pub/e/1450) I decided to immediately try to incorporate some of those ideas in an algebra class the very next day where we were going over word problems with formulas.

What I came up with was two questions, one given explicitly and one implied in a picture.  The first one was "How fast does Mr. Sweeney drive to work?"  Granted there was no piece of media attached to this, but it was an accessible question that every kid had an opinion on, and every kid wanted to know the answer to.
"Mr. Sweeney is young, I bet he drives really fast!"
"Is there traffic?"
"He must take the highway, I bet it's like 65!"
"The highway doesn't right from his house to school, so it must be lower"  etc.

I wrote down each student's individual guess and told them there would be a piece of candy for the closest (I'm not above bribes).  My goal was to "Be less helpful" so I was determined to only tell them where I live. They figured out they needed to use D=RT and know how long it takes and how far it is.  They kept asking questions trying to get me to do work for them, and I resisted answering. Eventually, they realized I wasn't going to budge and someone suggested to go to google maps.(Which gave both time and distance) We came to the answer, and then I told them how long it actually takes me(there's *always* traffic on the expressway!) and we solved again and I was happy.

Next, I showed them these pictures: 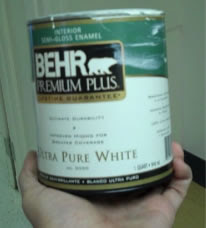 All I told them (When they asked) was that I am exactly 6 feet tall.  The question we decided on was "How far across the wall can I paint?"  ("How many cans of paint would it take?" was the first question, but I insisted there was only one can in the picture so we saved that for afterwards) To answer the question, they:
Enlarged the picture on the smartboard so they could see how much the can holds.
Figured out they'd need the formula for area of a rectangle solved for width.
Copied and pasted the picture putting my feet on my head to figure out the height of the wall.
Went to Behr.com to find out the range of areas you can paint a gallon of interior-semi gloss paint.
Converted from gallons to quarts.
Solved for the minimum and maximum distance across the wall that the paint would cover.
Measured the back wall and found how many cans of paint they would need.

They also came up with a lot of other ideas that we could've done if we had other tools or information ("Let's measure the height of the wall" "Alright, who has measuring tape?")  It was a lot of fun, and they really got into the lesson.  The best part was that a number of kids who don't usually participate at all were brimming with excitement and ideas.  It was so successful that I decided to call an audible on my second class and do the same activity with them too.

What kind of things like this have you done in your classroom?
Posted by Mr. Sweeney at 3:13 PM