Exponent rules can be difficult to remember, and memory has never been one of my strong suits. When I was in high school myself learning exponent rules, I would get mixed up just trying to remember them individually, and had to come up with a different way of thinking to condense it into one idea.  What I came up with deals with the levels of complexity of operations: 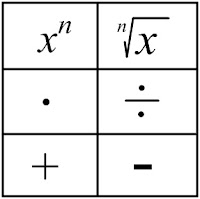 So, you've got your simple functions on the bottom, multiplication and division are a little more complex, and then exponents and roots are more complex. The actual chart above I created after the fact when trying to explain the idea to students later in life.  So, basically when it came to exponent rules all I had to remember was to "go down a level" of complexity. 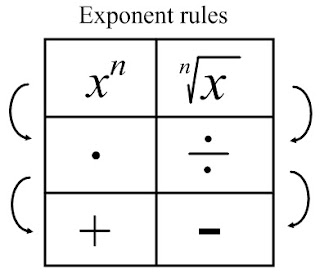 So multiplication becomes addition, division becomes subtraction, an exponent to an exponent becomes multiplication and a root with an exponent becomes division. The chart also helps for remembering when to distribute. Operations distribute on to the tier below them. (exponents distribute over multiplication and division for example)
My results with trying to get students to see the same thing I do has been mixed.  I usually end up doing an exploratory learning exercise with exponents , then going through the rules individually and only quickly going through this chart idea on the side.  While it doesn't really connect with every student, when a particular student gets the rules mixed up it can really help because it at least gives them a plan rather than just relying on straight memorization.
Later on, when I learned about logs it turned out that log rules (surprising to me at the time, not so much anymore) followed along the same lines, with exponents becoming multiplication, multiplication become addition, etc.
Anyone else ever think of it this way?  Have some other strategy for helping students get exponent rules straight?  Let me know!
Posted by Mr. Sweeney at 1:59 PM